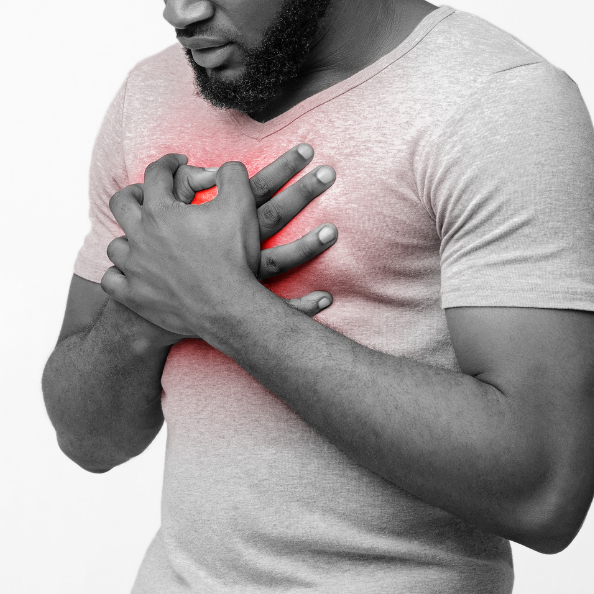 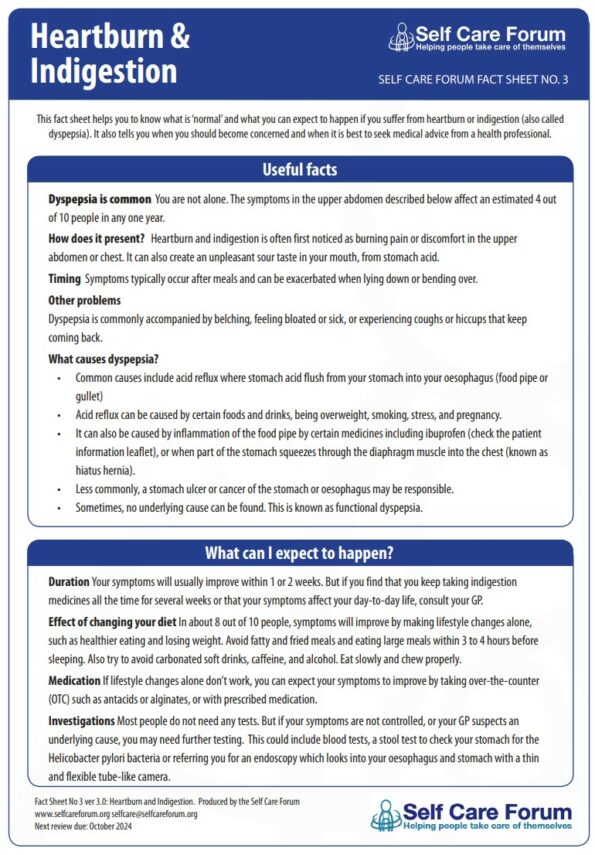 This information helps you to know what is ‘normal’ and what you can expect to happen if you suffer from heartburn or indigestion (also called dyspepsia). It also tells you when you should become concerned and when it is best to seek medical advice from a health professional.

Dyspepsia is common  The symptoms in the upper abdomen described below affect an estimated 4 out of 10 people in any one year.

How does it present? Heartburn and indigestion is often first noticed as burning pain or discomfort in the upper abdomen or chest. It can also create an unpleasant sour taste in your mouth, from stomach acid.

Timing Symptoms typically occur after meals and can be exacerbated when lying down or bending over.

Other problems
Dyspepsia is commonly accompanied by belching, feeling bloated or sick, or experiencing coughs or hiccups that keep coming back.

What causes dyspepsia?
Common causes include acid reflux where stomach acid flush from your stomach into your oesophagus (food pipe or gullet)

Acid reflux can be caused by certain foods and drinks, being overweight, smoking, stress, and pregnancy.

It can also be caused by inflammation of the food pipe by certain medicines including ibuprofen (check the patient information leaflet), or when part of the stomach squeezes through the diaphragm muscle into the chest (known as hiatus hernia).

Less commonly, a stomach ulcer or cancer of the stomach or oesophagus may be responsible.

Sometimes, no underlying cause can be found. This is known as functional dyspepsia.

What can I expect to happen?

Duration Your symptoms will usually improve within 1 or 2 weeks. But if you find that you keep taking indigestion medicines all the time for several weeks or that your symptoms affect your day-to-day life, consult your GP.

Effect of changing your diet In about 8 out of 10 people, symptoms will improve by making lifestyle changes alone, such as healthier eating and losing weight. Avoid fatty and fried meals and eating large meals within 3 to 4 hours before sleeping. Also try to avoid carbonated soft drinks, caffeine, and alcohol. Eat slowly and chew properly.

Medication If lifestyle changes alone don’t work, you can expect your symptoms to improve by taking over-the-counter (OTC) such as antacids or alginates, or with prescribed medication.

Investigations Most people do not need any tests. But if your symptoms are not controlled, or your GP suspects an underlying cause, you may need further testing. This could include blood tests, a stool test to check your stomach for the Helicobacter pylori bacteria or referring you for an endoscopy which looks into your oesophagus and stomach with a thin and flexible tube-like camera.

What can I do myself to get better - now and in the future?

Smoking and Alcohol Reducing or stopping smoking and alcohol intake may help improve your symptoms.

Over the counter medicines Various drugs that neutralise the acid in your stomach (antacids) as well as other drugs called H2-receptor antagonists and proton pump inhibitors (PPIs) are available without prescription at pharmacies. It is best not to take these medicines for a long time without consulting a pharmacist or other health professional.

Avoiding aspirin-like drugs If you take OTC anti-inflammatory pain killers, such as aspirin or ibuprofen, regularly, consult a health professional in case these could be the cause of the indigestion.

When should I seek medical attention?

Rarely, more serious medical problems may cause indigestion – particularly if you are aged 55 or over. Seek medical advice if your symptoms last for most days for 3 weeks or they do not respond to treatment or you notice any of the following:

Pain and other chest/stomach symptoms You suffer from severe, persistent (longer than 3 weeks), worsening and unexplained pain in your upper abdomen – particularly if occurring together with other symptoms, such as pain in your chest, breathlessness, sweating, feeling sick or vomiting.

Vomiting blood or persistent vomiting You vomit blood or dark lumps (like ‘coffee grounds’) or you are persistently vomiting.

Dark stools (poo) Your stool colour has become very dark (looking like tar). But remember that if you take iron tablets your stool can also become black – a harmless side effect which will go when you stop taking iron.

Other problems You suffer from unexplained fever, night sweats, unintentional weight loss, or you notice a swelling or mass in your upper abdomen.

Where can I find out more?

A member of your pharmacy team can help you with assessing or treating symptoms and with information about stopping smoking or weight management.

Or, visit the following reputable websites:

We review our health information every two years and this information is due to be updated in October 2024.  Here are details about how we develop and review our self care aware fact sheets.

We use cookies on our website to give you the most relevant experience by remembering your preferences and repeat visits. By clicking “Accept”, you consent to the use of ALL the cookies.
Cookie settingsACCEPT
Manage consent